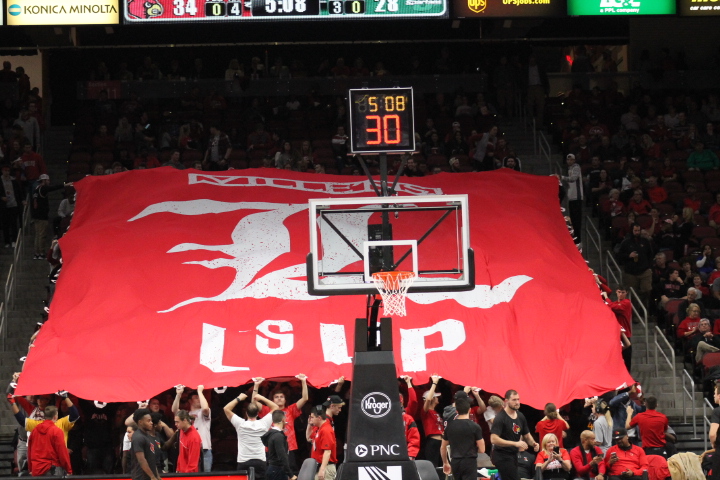 Early November in college basketball can be perplexing. It’s that time of year where the smaller D1 schools are traveling all over the country playing the role of patsy and getting that big paycheck. But sometimes these guys don’t get the memo that they are supposed to take the dive and a real dog fight breaks out.

Boston U and Evansville are two teams that have recently flipped the script on college basketball. On Wednesday night USC Upstate was trying to write their own script. They came out shooting 50% hitting 6 of 12 three-point shots. Their hot shooting staggered the #2 team in the country. Our Cardinals had the look of ”oh shit” in their eyes…

Getting the chance to cover my first game of the season I also had an ”oh shit” moment. I didn’t want to be writing that postgame. But after some back and forth in the second half our Cardinals remembered who they were.

They started doing what they do. ”Junkyard Dog” Sutton pulling down 15 rebounds, Darius Perry dishing out 9 assist with only one turnover, Ryan Mack shooting 5-8 from deep, and Jordan ”swag” Nwora just scoring. He finished with a cool 28.

The Cardinals were also sparked in the second half by the triumphant return of David Johnson and Malik Williams. Johnson had two big dunks and Malik grabbed three big boards that helped shift the momentum. It’s hard not to get giddy thinking about what these two are going to mean to this team once they get their sea legs back. Their return couldn’t have come at a better time.

The schedule doesn’t get any easier with Akron on Sunday and the Cardinals will face a very competitive Western Kentucky team next week in Nashville in a game that’s already got weird written all over it. A five 0 clock game on Black Friday that will only be broadcast on Facebook Live.

If this team keeps building on what they do it’s going to be hard for anyone to beat them. There are so many weapons on this Louisville team and so much versatility that they can absorb a blow like they did tonight and still win by 26… And two big-time players are back in the rotation.

Tonight was my first up close and personal basketball game. I thought I was going to be front row to a shit show but when this team flexed its muscle the shit hit the fan. My up close and personal evaluation is that these guys are really good. How good their season goes will depend on other variables but they got the goods to give us our Atlanta redemption. Cards are 5-0. I’m here for it…