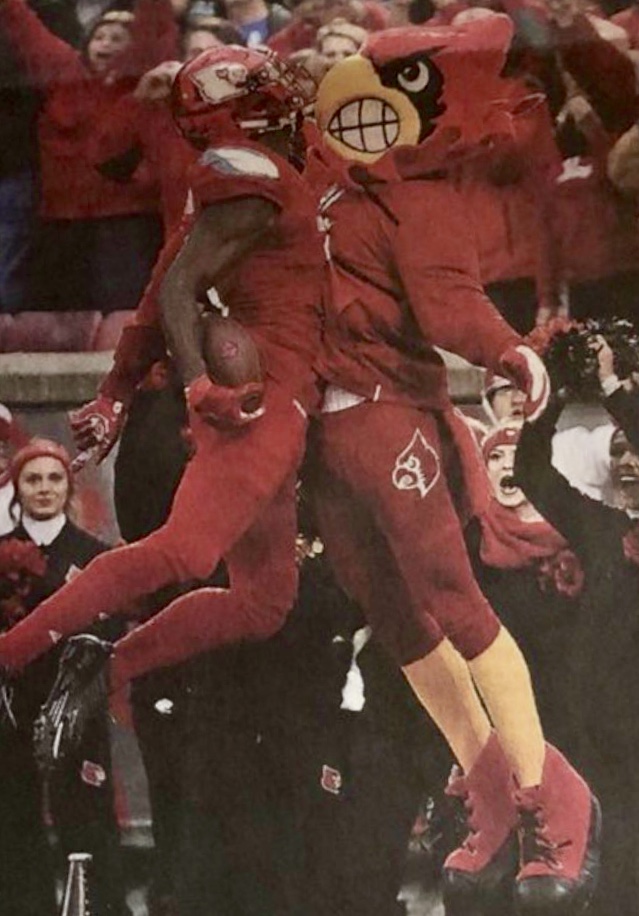 This picture from the Courier-Journal over the weekend sums up what kind of weekend it was for the Louisville football program. A now healthy Malik Williams celebrating one of his two touchdowns with leaping Louie… He led the team in rushing with 180 yards. I can only imagine what could have been if he and Dae Williams had been healthy all season. This is a different offense with a solid ground attack. But better to have it now as not have it at all. This team is rolling…

They say a picture is worth a thousand words and it would probably take a thousand words to explain what having a player like Lamar Jackson has meant for the Louisville Program. He might be the most talented and gifted college football player of our time. And is a great young man to go along with all of that. Louisville fans have sure been spoiled. We went from having a player like Teddy who will forever be known and admired for how he won big games to Lamar who will always be known for and admired for how well he plays the game. And both are great people. He might not win the Heisman but we all know who the best player is.

It hasn’t been the season that we all expected but we are finally seeing the Louisville Football team that most of us expected this season. Over the last two games the offense has looked like a well-oiled machine and the defense is making the plays they were missing just a few weeks ago. Coach Sirmon was running the side-line yesterday like his pants were on fire and his defense is finally responding. It was tough to watch these guys lose those games while giving up all those points. But it sure has been fun watching them turn things around.

And talk about turning things around Coach Summers has transformed the Louisville offensive line. There was a picture floating around Social Media over the weekend titled “4 up and 4 down”. It showed the Louisville O-Line standing over 4 Syracuse defense Line-men as they lay helpless on the ground watching Lamar Jackson trot for one of his touchdowns. Last year year at this time that photo would have looked a lot different. This group went from giving up around 39 sacks this time last season to around 27 this season. That’s a big improvement. When interviewed at Media Day Coach Summers talked about his guys winning the battle zone. It’s obvious this unit is winning more of those battles now.

Everybody is healthy, and everything is clicking at the right time. The Cardinals will now head to Lexington seeking their 4th Straight Win on that field. I was on the field at the Georgia Dome when Lamar made his College debut and will be at Commonwealth Stadium on Saturday when he plays his last regular season college football game. There are plenty of seats available on StubHub for all of you to join me.

Here is the link: Louisville vs Kentucky for The Governor’s Cup

Don’t miss the chance to celebrate the Red in the city of Blue. The Cup is coming home…