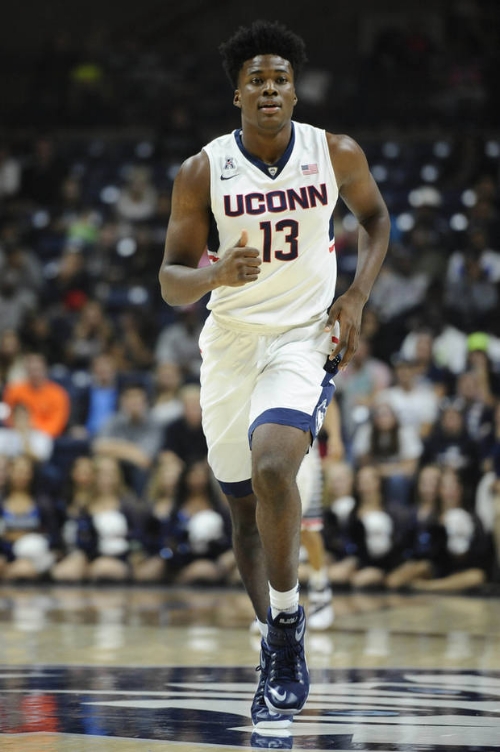 The Louisville basketball program got some big man insurance for the future today with the news that UCONN 6-11 center Steven Enoch will transfer to play basketball for Coach Pitino and the Cardinals. Enoch visited the campus a few weeks ago and must have liked what he heard from the Louisville staff. The most important part of that conversation is how big of a role that Enoch could play in the 18-19 season. Enoch will sit out a year and then have two years of eligibility left.

Enoch is your typical Pitino type player. He was in the 2015 recruiting class with Donovan Mitchell, Deng Adel, Ryan McMahon and Ray Spalding. And like those guys was labeled as a recruit with a lot of upside. Enoch was a 4* recruit and ranked #99 in the ESPN100. Here are what scouts said about Enoch in 2015:

Enoch is a late blooming big man who barely played high school basketball as an underclassman but has continued to both grow and develop at a rapid rate. He’s got good size with a naturally strong build and long arms. He’s a solid athlete who can change ends and play above the rim. His skill set has been well developed so that he is a consistent shooter from 15-18 feet and a threat from behind the three-point line. He’s starting to develop a jump hook over both shoulders with his back to the basket but also has a naturally high release point in or around the paint. He’s quick in catch-and-finish situations, a solid rebounder, and good shot-blocker.
Weaknesses:
He’s largely unproven against high level competition and still very much a work in progress. Consistency is arguably his biggest problem right now as he can disappear for long stretches at a time. He’s a product of a skill development generation and so while he can look great in a workout, he’s still learning to adjust to the many variables that game conditions and defenders create.
Bottom Line:
His recruiting has taken off by his long-term potential, now it becomes a matter of backing up his newfound reputation as he’ll have to turn potential into production on an increasingly frequent basis.

Enoch’s production and development at UCONN has been a slow go it seems, but having that year to work out with Coach Pitino and his staff will really be a big boost to that. I Look for Enoch to be a big-time contributor for the Cardinals in 18/19 season as well as his senior season 19/20… A great add to the program.

Here are Enoch’s stats during his two seasons at UCONN: