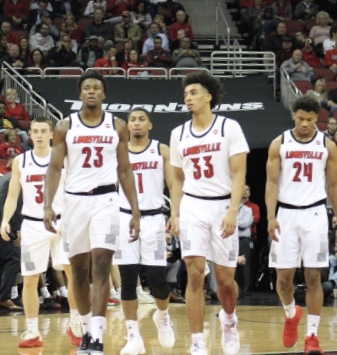 The College Basketball season is not a sprint but more like a marathon. Our Cardinals are about to hit the second leg of the marathon on Sunday afternoon in the Yum Center. I always looked at Conference play as the season within the season.

As a Coach and a fan, you hope that the non-conference prepared them for the grind ahead. Everything gets more physical, mentally challenging and premeditated in conference play. The team’s who play hard, smart and with great execution will prevail over the next couple of months. This Louisville team was challenged on all three levels during the non-conference schedule.

When I think of toughness I think banging inside and rebounding. The Cardinals toughness has been tested early on. Playing against some of the best rebounding teams in the country and holding their own. Michigan State, Tennesse, Marquette, Lipscomb, and Indiana all rank in the Top 50 nationally in defensive rebounding. While UK is among the Top 50 in offensive rebounding. Mich St, UK, and Marquette are all ranked Top 20 in Rebound margin.

In the last game, our Cardinals did bang the boards with a team ranked second in the country in rebounding margin at the time (UofL 33 rebs, UK 34 rebs) and won the offensive rebound battle (UofL 13 rebs, UK 10 rebs). UK came into that game third in offensive rebounding percentage. Hitting the glass is important in basketball but it’s crucial in conference play.

When I think about their mental toughness being tested I think about the game against Seton Hall on the road. That game was tied at 5 different segments and had six different lead changes. Louisville dominated the boards that day 42 – 28 and hit 11 of 12 free throws to win a close one. Cards were mentally tough that day but then lost some of that mojo when they played flat against Robert Morris and really lost the mental battle with Kentucky. They are a monkey on our back at this point.

This team is showing some promise heading into conference play and have had about everything thrown at them so far. The Cardinals are ranked nationally #87 in Scoring offense, #6 in Free-throws made, and #16 Free throw percentage. If this team makes a run it will be done as a result of great offensive execution and getting to the free throw line. The defense has been hit or miss with this group early on. Hoping this extra week helped them make up some ground there.

As far as individually Jordan with 17.8 points and 8.4 rebounds per game and CC with 9.6 points a game have been the most consistent players. While Sutton with 9.1 points and 5.9 rebounds per game and Steven Enoch with 8.8 points per game have had a few stand out performances. Really would like to see another guy get into the mix during conference play. VJ, Darius, Malik, and Ryan have to raise their level of play night in and night out.

I always enjoy the conference part of the schedule. We had some great Rivalries roll over into the ACC from the Big East days with Notre Dame and Syracuse and have formed a new one with Virginia. The ACC conference looks to be tougher than ever and I think this Louisville team can be right in the mix.

It all starts on Sunday with Miami. They are a team that will play solid defense on every level without fouling. A tough team in the paint. Our frontcourt will be tested in the conference opener. This Louisville team has exceeded most expectations and I think Coach Mack still has a few tricks up his sleeve. Looking forward to covering this game and looking forward to seeing what this Louisville team has for the ACC. Go Cards.