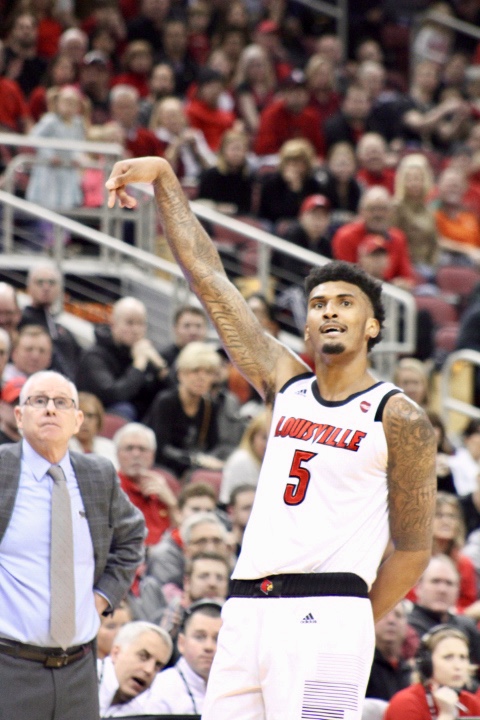 It wasn’t pretty early on but I will contest that playing just 3 games in fifteen days was the primary reason for the guys coming out flat. I even asked Coach Mack about it after the game. I knew it would take a bit for them to adjust to the bright lights but once that happened the Cardinals got to see some of that hard work in the gym pay off.

They were locked in towards the end of the first half and for most of the second half. They were playing like a team that has spent a lot of time in the gym together. Communicating, making the extra pass, crashing the boards and had five different players scoring in double figures. Everybody on the team was scoring. I mentioned in my Pregame post that this team needed other guys to step up and that happened in this game.

It’s great having a player like Jordan Nwora in a game like this. He put the team on his back in the first half scoring 18 of the 40 first-half points. That one-handed alley-oop dunk was next level. My dude Swag is next level…

Dwayne Sutton is the Junk Yard dog of this group. It was good to see him get some of his bark back on Sunday. He played physical got to the free throw line and scored at every level with 13 points. He also banged the boards and was 3rd on the team with 7 rebounds. This is the Sutton this team needs.

Ryan McMahon is such a great young man and such a team guy. All of these teams have scouted Louisville enough that it’s made it even harder for Ryan to get his shot off. With his size disadvantage, he has to earn it. He never hangs his head and instead uses that attention he draws to himself on that three-point shot to get his teammates opportunities. He had 9 assist in this game. So glad he’ll be around next season. Those freshman coming in will benefit having a player like him in the locker room.

Malik Williams has so much upside and Coach Mack is getting the best out of him. On Sunday he messed around and got a double-double with 19 points and 11 boards. He also had 1 blocked shot. He is a high-level shot blocker with great length and timing. After this game, he moved to #114 nationally in blocked shots. He can be a big threat on offense but his defensive presence means everything to this team.

I have lauded over ”CC” Christen Cunningham all season. Dude is a gamer. He is taking full advantage of his opportunity as a grad transfer and there aren’t too many grad transfers who mean more to their team than CC does. In the second half when Miami tried to make their own little run he was the dagger with a scoring flurry of his own. He finished with 11 points and 5 assists.

I’m only going to say this once. Leave VJ King alone. Stop saying he’s gonna eventually break out and stop with all of the lofty expectations. VJ is VJ. The young man is a great teammate and his peers are always praising his demeanor. The Louisville Basketball program has put this guy thru hell (3 different Coaches) and he hasn’t once wavered. Not once! So please spare us all of the ”fan” bullcrap. Cheer for VJ King and be happy for him when he has a good game. You don’t see his type of loyalty in young people often. Embrace that.

It’s great in so many ways to get that first win in conference play. It will help these guys carry some momentum with them on the road and good for morale after that tough loss to Kentucky. They can put that one behind them now. And so can we. It will be wins and losses in conference games like this one against Miami that could determine our Tournament chances come March.

I had a great evening inside the Yum Center. I love this team and I’m looking forward to the rest of the season. Go Cards!