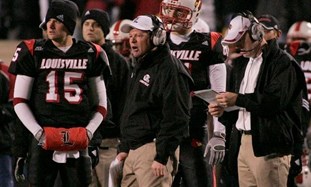 About 12 years ago I hit a pretty good stride in my life. I had just met the girl who became my wife and got the job that I still hold to this day. 2006 was a great year for me and a year that played a big part in where I am today. There was another guy hitting his stride in 2006 and Bobby Petrino had my Louisville Cardinals Football team on the cusp of College Football greatness.

Sports writers found all kinds of creative ways to describe what was then (and might still be) the most hyped game in Louisville’s history. Even with the Breeders’ Cup at Churchill Downs, Louisville football was the biggest story in town that week. I remember some of the local news guys doing live feeds from inside an empty (then) Papa Johns Cardinal Stadium on that cold November 2nd morning before the game. 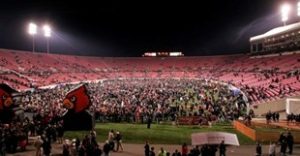 By nighttime, a crowd of over 43,000 fans packed the stands, (a record crowd at that time) most of them were wearing black to take part in what Louisville Football promoted as a “blackout.” First Blackout promotion of Bobby Petrino’s career. He really hit peak Bobby Petrino that night when his team beat #3 WVU ending their 14 game win streak and propelling the Cardinals into BCS Title Talk.

“We keep track of our run-pass ratio. We wanted to stay aggressive and our players like to play that brand of football.”

“If we only score 28 points, we feel like we’re struggling. Our guys are very motivated to be No. 1 in the nation in total offense.”

These are few of Coach Petrino’s quotes from that game… Man those were the days. He was a coach that wanted to beat you and wanted to score a hundred points doing it. I loved watching that brand of Louisville football. After that first Blackout game, the Cardinals were 8-0 celebrating the biggest win in school history. A win that vaulted the Cardinals into the heart of the national championship race that year. 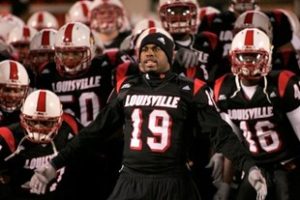 We all know the story too well on how that season ended… Looking back at it now everything really started to unravel for Bobby Petrino after that November night in 2006. His BCS Championship hopes vanished in New Jersey. He left Louisville on the first train out of town to the NFL after that season. An experiment that didn’t end very well for him. Then he got his shot coaching in the mighty SEC only to have his infatuation with SEX ruin that coaching stop.

But everyone loves a good comeback story and at the Blackout game on Labor Day in 2014, it looked like we were all going to have a front row seat to one. Our Cardinals beat Miami on that Monday night 31 to 13. The victory provided a successful Atlantic Coast Conference debut for the Cardinals and to Bobby Petrino’s second coaching stint at the school. 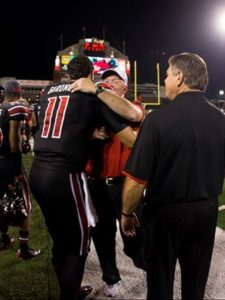 There was a lot of similarity to his first Blackout game at Louisville that night. The hype and all… The Cardinals took the field under the lights in all-black uniforms with matching chrome helmets to thunderous cheers from a record crowd of 55,428, all but a few dressed in black. 31 points! That Bobby offense was back. The hype was back.

Maybe the Louisville Football program and Coach Petrino are trying to recapture some of that Blackout game magic announcing the promotion this week. But the hype is gone. Sports writers are just trying to find the motivation to write about this game. There won’t be any live feeds from an empty Cardinal Stadium on Friday morning. The stadium might be empty at game time Friday night. A Blackout game in Louisville used to be the hottest ticket in town. Even eclipsing horse racing royalty one time. This week I’ve got alerts every day from a ticket app on my I-phone about ticket prices being slashed. 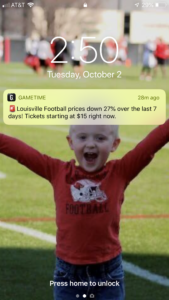 The Cards won’t be playing Friday night to be in the conversation of College Football’s elite. Instead, the loser of this one will be considered one of College Football’s worst. A harsh reminder for this College sports fan that things can change quickly and boy things have changed around here quickly. But hey I’m still a sucker for a good comeback story. Maybe there is some magic left in those Black uniforms.

“If we win out, there’s no way they should leave us out.”

Running back Kolby Smith said that after a program-changing win in that first Blackout game in 2006. Now he is the Louisville Running Backs coach. I’d love to see his group come to life on Friday night. Freshman RB Hassan Hall looked like a younger version of his coach in the game against Florida State. And I’d love to see WR’s Jaylen Smith and Dez Fitzpatrick channel some of that Mario Urrutia and Harry Douglas magic of Blackout old. Maybe Puma can channel some of that Will Gardner swagger from that game in 2014.

2006 was a good year for Bobby Petrino and it is the reason he is where he is today. Brought back in and given an ironclad contract by Tom Jurich. I’m sure he thought he’d see Coach Petrino recapture some of that fire. He wasn’t ready to throw in the towel on an old friend and I’m not ready to throw in the towel folks. But we need to see some signs of life from that guy who used to want to score a hundred points. I am a sucker for a good comeback story. I want this team to succeed and will be cheering my ass off for them on Friday night.

(photos in this story courtesy GoCards.com)